American Medium is proud to present Local Atonement: A Nutshell Study of Unexplained Death, Wickerham & Lomax’s first solo show in New York in four years. The exhibition will trace some of the key themes in their 2012 Artists Space show DUOX4Larkin, which concerned the workspace as an articulation of one’s identity and the compulsion to personalize.

Within a series of large-scale digital paintings are objects that function in dialogue with the televisual—set design, set dressing, and props—while simultaneously challenging traditions of object presentation: the still life, shadow box, and vanitas. The hierarchy of these objects is not based on their utility, but in their ability to assist in manufacturing narrative. It is similar to the contemporary phenomenon of posturing for social media and yearning for the indicator of an experience more than the actual experience itself.

Wickerham & Lomax's ongoing web-based narrative BOY’Dega: Edited4Syndication (since 2014) presents their character Kimbra, whose parents own an antique store. Characters in the BOY’Dega universe are shells (files) for storing various contemporary phenomenon and articulating them through peripheral means. The antiques suggested in these works seem to inherit a contagion, forcing on them some of the bodily aspects of those who have owned them: an old basketball wears a corset, a head continues life in a Ziploc bag, and a severed arm continues drafting a letter of discontent.

“These rooms evoke the incomparable silence of houses whose objects have suddenly and unexpectedly outlived the inhabitants who arranged them.”

The idea of location as character and the insidious aspects of its effects on its occupants lead to notions of escape, the discarded, and identity confusion, all colliding to punish the artists with their own set of iconography. The use of this recurring iconography is a way of running towards obsolescence and rendering these items into antiques. The matters of concealment and distraction are both taken up as forms to depict in a dizzying, yet legible, presentation.

[Quotes from Patricia Storace’s The Shock of the Little] 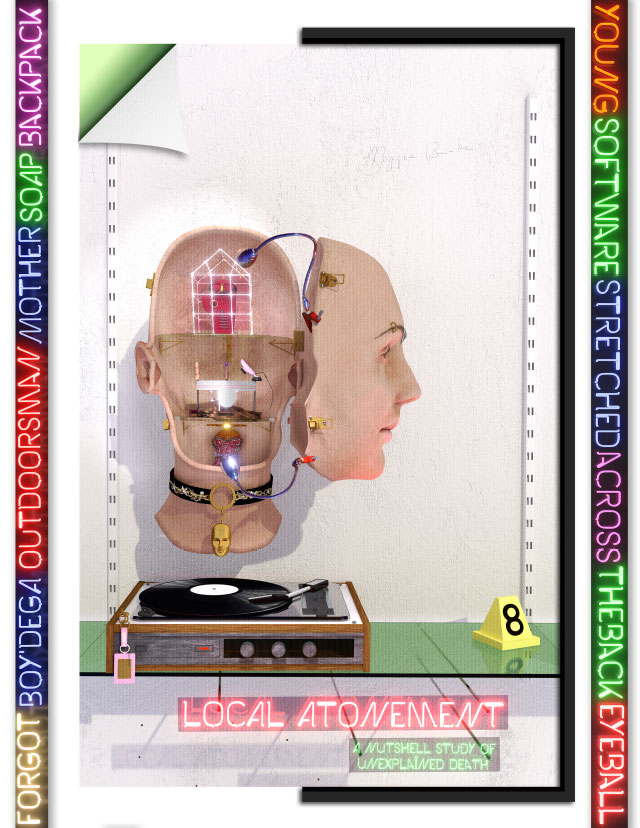